COVID-19 Update – Read about how we're doing our part to keep everyone safe and for more information on the impact to your efficiency project. Read More
Lime Energy Co. Reports Results for Three-Month and Six-Month Periods Ended Jun 30, 2011

Ends Quarter with Record Backlog of Contracted and Awarded Business

HUNTERSVILLE, NC, August 8, 2011–Lime Energy Co. (NASDAQ: LIME), a leading provider of energy efficiency and renewable energy solutions, today announced its results for the three-month and six-month periods ended June 30, 2011. “Our results for the second quarter and first half of the year were in line with our expectations,” stated John O’Rourke, Lime Energy’s CEO and President.  “Our utility program management business continues to show strong growth, with revenue up 77% over the second quarter and 114% over the first six months of 2010.  Our public sector markets continue their rebound from a soft first half of 2010, with revenue up 23% and 30% from the second quarter and first half of 2010, respectively.  Our C&I market, which was the focus of our recent restructuring, continues to reposition and refine its business strategy.  Its revenue was down 17% for the quarter and 7% through the first six months of 2011.  The restructuring we initiated during the second quarter was aimed at reducing costs, increasing operating efficiencies, and streamlining the organization to better align the SG&A supporting the C&I market with its expected revenue and to better integrate it with the operations of our public sector and utility group.  We remain firmly committed to this market and believe that the reorganization will not only reduce costs, but permit us to increase our focus in this market in those niches where we have the greatest competitive advantages and offer compelling solutions for our customers.  Despite this softness in the C&I market, we are feeling very good about our prospects for the balance of the year.  Our backlog of contracted and awarded business increased substantially during the quarter across all our markets to almost $190 million, which is more than double what it was at the beginning of the year.”

We expect to continue to experience higher revenue for the balance of the year, relative to 2010 levels.  Our revenue is also expected to continue to be seasonal, with revenue continuing to build throughout the year.  We currently have about $190 million in backlog, and expect our third quarter revenue to be between $30 million and $35 million.  Our backlog includes signed and awarded contracts, including multi-year contracts under utility programs. 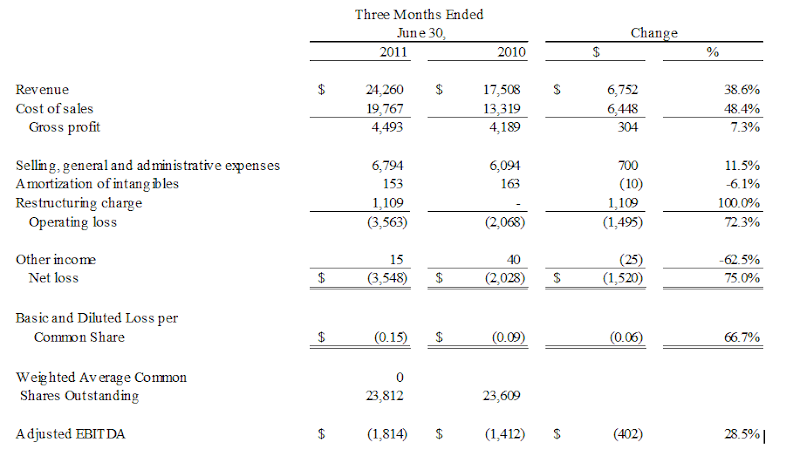 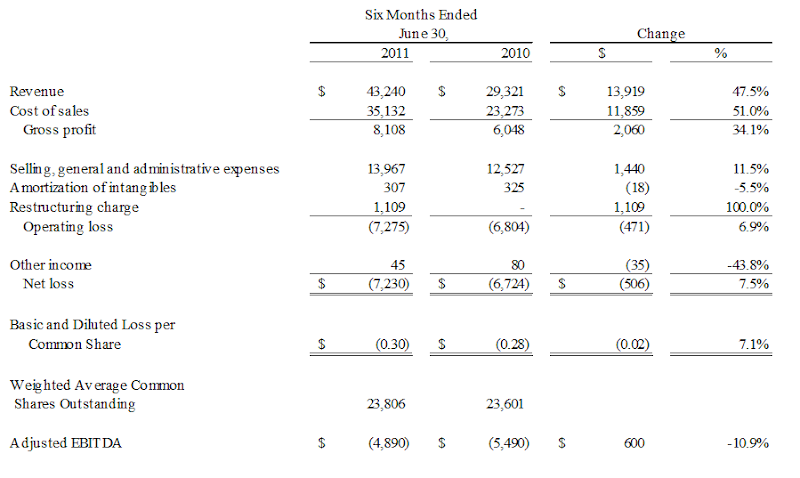 We report our financial results in accordance with generally accepted accounting principles (“GAAP”). However, we believe that certain non-GAAP financial measures that we use to manage the Company’s business fall within the meaning of Regulation G (Disclosure of Non-GAAP Financial Measures) by the Securities and Exchange Commission.  We have included these non-GAAP measures in the press release because we believe they may provide readers with additional meaningful comparisons to prior reported results.

A full analysis of the three month results will be available in our 10-Q, which we will release on August 8, 2011 and will be made available on our website at www.lime-energy.com or on www.sec.gov.

Lime Energy is a leading provider of energy efficiency solutions. Our services include integrated energy engineering, consulting and implementation of solutions which enable our customers to reduce their facilities’ energy consumption, lower their operating and maintenance costs and reduce their carbon footprint. We focus on solutions which include lighting, mechanical and electrical upgrade services, water conservation, weatherization and renewable project development and implementation. We provide these solutions to the commercial and industrial markets, utilities, energy service companies (ESCOs) and the government sector across a wide range of facilities including high-rise office buildings, manufacturing plants, retail sites, mixed use complexes and large government sites. The company’s stock is traded on NASDAQ under the symbol LIME. Additional information is available at the company’s website at www.lime-energy.com or by calling 847-437-1666.

They Saw the Light

Lime Energy has saved business owners across the country more than $1.5 billion in energy costs. Find out how.